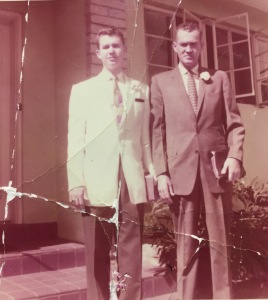 I think about aging. Will I age gracefully? What will age take from me first, and what will I hold onto the longest? Hints to these answers come from my dad, as I watch him age. Year by year his world shrinks as he becomes less active. He speaks slower, softly, and is sometimes far behind in the conversation. Yet evidence of a sharp mind persists. He can still beat me two out of three in Crazy Eight, and he’s not above taking his kid’s and grandkid’s money in a game of poker. I have hope.

This past summer, Dad took a fall. Pushing eighty and unsteady on his legs for some time now, he has been dependent on a walker for mobility, and it got away from him on his way to bed that night. He fell and broke his hip, which got him an ambulance ride to the newly built hospital on its opening day. I told him that I would have taken him on a tour of the place if he’d just asked. He didn’t think that was funny.

The whole thing was quite an ordeal. There was trouble with the x-ray, which had to be repeated a couple of times. They couldn’t get a clear shot of the hip because he was curled up in a rictus of pain. Then there was a concern that he’d perforated a bowel somehow in the fall. More delays. More x-rays. The order for surgery wasn’t approved until the third day and by that time we were all weary of the place.

On his last full day at the hospital, he had an odd visit from a social worker. She stuck out immediately; older than the orderlies and younger than the medical staff, dressed in plain clothes as opposed to scrubs, equipped with a fiberglass clipboard and file folder of medical records rather than a stethoscope and a prescription pad. She introduced herself with a forced smile, speaking in a too loud voice people reserve for both the very old and the very young. I was expecting a conversation about when we could take him home, but that wasn’t what she was there for.

It slowly became apparent that she wasn’t there to provide any medical service. Rather, the hospital wanted a mental health evaluation before he left. I doubted the exchange would provide much information. Dad is a tough nut to crack; he plays his cards close to the vest, and he’s known for asking people questions they can’t answer. On that day he was still struggling through pain, the stress of an extended hospital stay, and the aftereffects of a pharmacopeia of drugs. I didn’t think she’d get much out of him.

Once award introductions were made and we had the confusion cleared up, she went right into the evaluation with a forced cheerfulness. She opened with questions to see how aware he was of his surroundings, like what’s your name? What’s the year? Who’s the president of the United States? He answered as if from a distance, clearly struggling through a haze brought on by the lingering aftereffects of the powerful painkillers he’d been on since admission. Thinking it was still 2016, he’d scored two out of three. I watched her sunny facade sort of slip as she finished this first section.

She then read a short story, which was something like ‘Sally in the work force’ and followed it up with questions designed to test his short-term memory. Questions like, who was Sally? Why did she quit her job? Why did she eventually go back to work? Dad nailed each question. She was still disappointed. He took a long time to answer each question; it gave the impression he was struggling to keep up. She glanced at her watch. Her face read, “This evaluation is a waste of my time.” She was trapped by the system that needed a complete evaluation before he left; it was clearly too soon after surgery, but there wasn’t time to do it before the rush to discharge him the following morning.

As mental health assessments go, this seemed to be quite a blunt little tool. How could anybody be fully coherent and feeling good about themselves after such an ordeal? Dad endured the whole thing with patience, but the social worker had been in a hurry to rush through the evaluation, get out of the room, and on to her next appointment.

As she made her pleasantries and rose to leave, dad asked in a soft voice for her to wait. “I have a story to tell you. And I have a question for you,” he said. This made her confused for a moment. It wasn’t how the engagement was supposed to go. She expected to come, administer the test, and get out in under twenty minutes. I could see it dawn on her that she wasn’t going to make a clean getaway. Her smile vanished and her brow furrowed. She couldn’t see an easy or graceful way to refuse him, not after putting him through the same thing. How could she decline?

“You want to tell me a story?” she asked as she slowly sank back into her seat, giving a patronizing nod, begging with her eyes that this be brief.

“A short story,” dad assured her. “And a question,” he repeated. She was trapped by social niceties. It would be bad form for her to bail on his story when he had so graciously listened to hers; she agreed to stay.

Dad is good at telling stories, and he told this one well. But it came out slowly, painfully. His voice was weak, and more than a little gravely. His used dramatic pauses to cover for moments when he had to gather his strength to tell the next part. But the pauses were overlong.

The social worker wasn’t a good listener. She put in an “uh huh” and an “oh my” into each pause as if she was hoping to skip to, or force the end. They came less frequently as he went along as she slowly lost any hope of a quick getaway. The story he told was the one about the French Executioner and it went something like this.

During the French Revolution business was good for the executioner. There were a lot of heads to chop off, but he was only paid a flat rate. He was a family man with a wife and kids which came with a lot of expenses so he had to make extra money any way he could. He had two axes. One was a sharp ax that would take a head off quickly and cleanly. Death was instantaneous, but it wasn’t much of crowd pleaser. The other was a dull rusty ax. It was quite a bloody spectacle when he used this tool. It sometimes took a couple of swings to completely sever the head from the body. The crowds loved it and would throw money onto the platform when he used it. He did most of his jobs with the dull rusty ax. The occasional Noble up for execution would take the opportunity to offer a bribe to the executioner to use the sharp ax and make it a clean quick death. If it was for more than what the executioner thought he could make from the crowd by using the dull blade, he would take the money and swing with the sharp ax. One day, after a particularly stirring Sunday morning sermon, the executioner became a Christian. He kept his job as executioner; he had no other skills, what could he do? However, he didn’t take as many bribes as he used to, and he did most of his jobs with the sharp ax.

Silence stretched out after this last sentence. It was a bit before the social worker realized the story was over. “That was a really good story” she said as she was getting up to make her escape.

Dad wasn’t finished with her. “I have a question for you.” He said. This took a bit to sink in, despite it being the third time he’d said it. She slowly sank back to her chair. “Oh, y-you want to ask me something about the story?” she stammered. There was a growing look of not-quite-horror on her face as her smile went away.

Dad asked, “What did it mean to the executioner, for him to become a Christian?” It was as she feared, a question she couldn’t answer. Maybe it didn’t even have an answer. She clearly didn’t know what to say, but couldn’t get away without making some sort of effort. He waited. He likes to let silence work for him.

“Well, um …” she hesitated. “Well, I guess it meant a great deal to him” was all she could come up with, saying it with a smile and a nod full of false finality. Dad nodded with her in sympathy. This was it, she realized; the end of the session. She could leave, not on her terms, but his. I could see on her face that she knew he had the better story. He also had the better question. And somehow, her meager answer wasn’t quite enough; she’d missed something but didn’t know what. She left, dad apparently learning more about her than she did about him, despite her questionnaire and his medical records.

Dad may be getting on in years, but he’s not too old that he can’t have one over on a social worker sent there to judge his mental state. The answer to his question is the same for everyone at conversion: becoming a Christian changed the executioner’s life, but he still had a long way to go. Dad is still sharp; sharp as the executioner’s now preferred tool. I hope I’m just as sharp when I get to be his age.